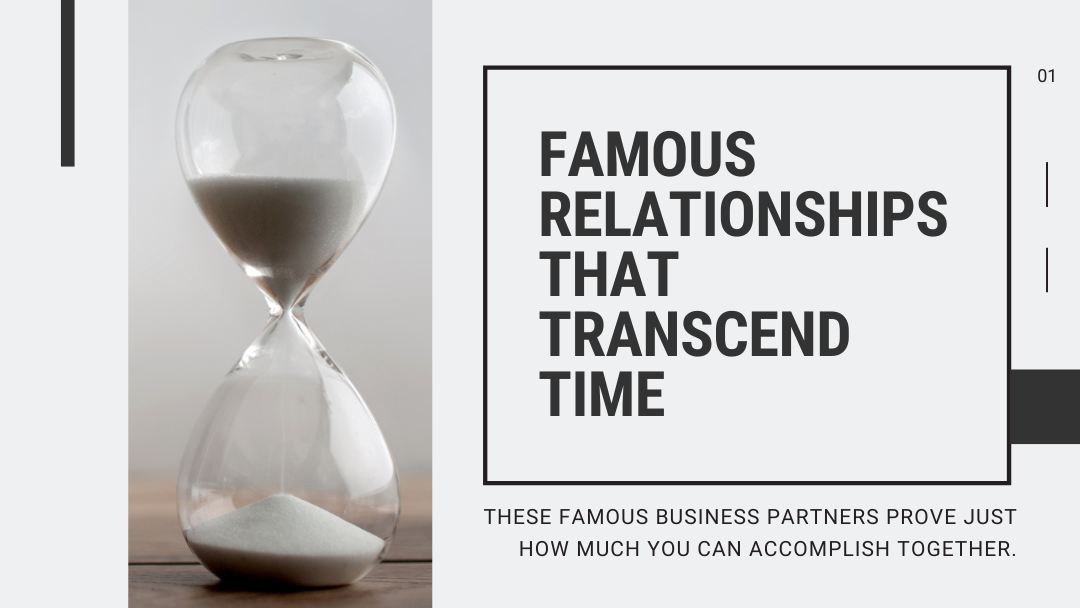 Success is a shared responsibility, and these famous business partners prove just how much you can accomplish together.
‍

Great partnerships can create great things. Let's take a look at great business partners that were able to build relationships that transcend decades and impact the world.

‍
Two men who need no introduction, Bill Gates and Paul Allen transformed a friendship into a successful business relationship. The pair met in high school and bonded over a computer bug they found in the school’s computer terminal. As you may know, the pair went on to co-found Microsoft and transform not only the computer industry but also daily life as we know it.

Drop their last names, and this duo becomes instantly recognizable. The two childhood friends founded the famous Ben & Jerry’s ice cream brand after Cohen dropped out of college, and Greenfield failed to make it into med school. They switched to ice cream after completing an ice cream-making course at a local creamery.

What makes their partnership unique is that Cohen has anosmia (a lack of taste or smell), so he relied on the ice cream’s mouth-feel and texture. This is why the brand has become famous for its chunky ice cream that adds texture and dimension to every flavor.

Their partnership works not just because they’re friends but also because of their shared values. According to Greenfield, “We measure our success not just by how much money we made but by how much we contributed to the community.”

It takes a high level of trust, commitment, honesty, and—let’s face it—hard work to build a creative partnership. John Lennon once described himself and McCartney as working “eyeball to eyeball” when collaborating on songs. Later, the pair revealed that sometimes, they would work on their own songs with limited input from the other but stuck by an earlier agreement that they would be equally credited on every song.

The band continues to live on as one of music’s biggest influences. They changed popular music forever and serve as a powerful example of just how much can be accomplished when partners support each other.

Even if you’re not familiar with their names, you’re probably a user of their quintessential development: Netflix. The pair took an established system and turned it on its head, changing the way we discover and enjoy videos.

But what many may not realize is that their partnership is one of ruthless honesty that continues to push each other to grow. In 1998, Hastings fired Randolph via a PowerPoint presentation that highlighted problems with his hirings, judgment, and financial choices. But rather than let anger take control once Hastings took over as CEO, Randolph used the opportunity to step back and be honest with himself about the situation.

“Reed and I have always had this relationship of complete honesty, trust, and transparency,” he told Yahoo! Finance. “He was not pushing me out, what he was proposing was [that] we should run the company together. That together we’d be a stronger team and that this would be the thing we should do if we wanted to make the company successful.”

No one makes it to the top alone. Collaboration is key in developing new ideas and tapping into the strengths of others to drive those ideas forward. The first step: establishing authentic relationships with the right people.
Building long-lasting relationships takes intention, sincerity, and effort. This means being consistently attentive, not just when you need a favor, and paying attention to the details about the person who is in this relationship with you.

Learning to develop relationships can help you turn connections into lifelong partnerships—there’s no telling what you might create together!
‍