HOW TO DIG DEEP AND TRULY CONNECT WITH PEOPLE 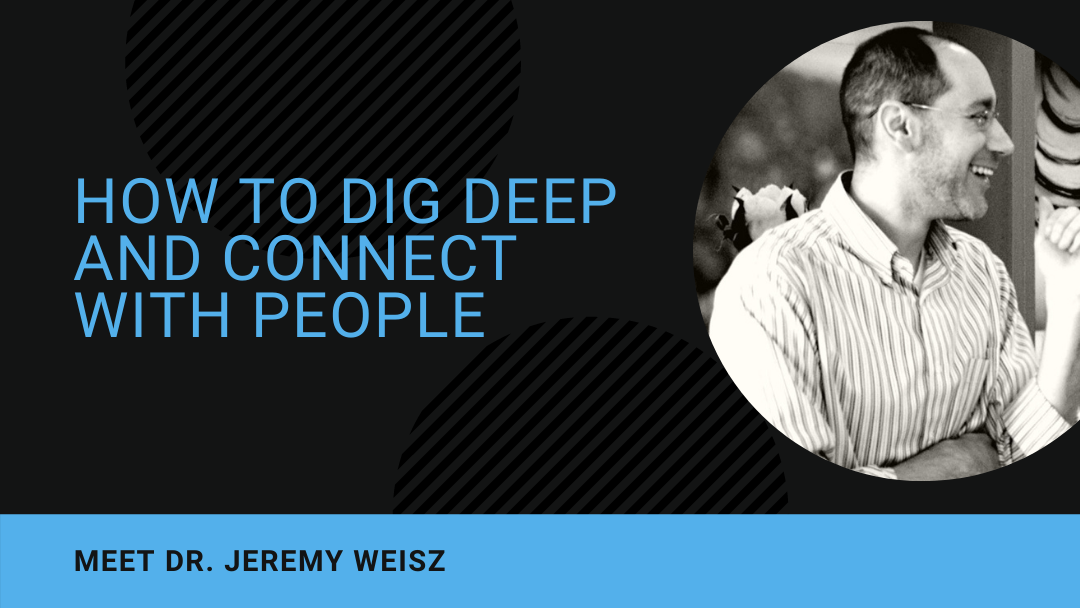 Dr. Jeremy Weisz believes it’s making the conversation about other people and talking less about yourself.

As a chiropractor and founder of done-for-you podcast service Rise 25, Dr. Jeremy Weisz knows a thing or two about getting people to open up. Whether in the middle of a show or working one-on-one with a patient, he believes the key to authenticity is showing others you care about what they have to say. Here’s his advice on how to dig deep and truly connect with people:

CARING IS A LEARNED SKILL

Most of us learn about love and caring from the way we’re raised, and Weisz credits his supportive family during his childhood, particularly when it came to sports. “I played competitive baseball and had about 50-60 games a season. As I look back, I don’t know how my parents did it with three kids.” But for his parents, it was just business as usual.

Weisz notes that much of his intuitive nature also goes back to childhood, where he focused on natural health at an early age. “I was seven or eight, and I remember being hesitant about taking medication for a fever. I thought I was supposed to have that fever for a reason. I also saw my dad go to medical professionals for years for a tingling in his fingers, but after he went to a chiropractor, he improved significantly.”

Weisz’s intuition and different mindset allow him to focus on the core of his patients’ problems, not just the symptoms. “I don’t say ‘Here's a prescription, go get yourself some pain meds, and I hope you get your stuff fixed.’ It's like, ‘Why don't we fix you so you never have to come back again.’”

Weisz believes that the ability to connect isn’t always natural but rather learned through various touchpoints throughout life. And though his approach to health may not be a societal norm, his mindset of being a better friend has allowed him to make stronger connections with the patients he serves.

Those who have connected with Weisz in the past liken his ability to get people to open up to a superpower. Weisz disagrees and instead attributes his success to these five things:

As a chiropractor, Weisz is in the business of helping others, so he approaches every situation as an opportunity to add value to someone else’s life. “I know that a lot of what we see and hear today is just surface talk, so I try to find an angle that creates depth in the conversation.”

His main approach is to focus on what he can bring to a relationship without expecting anything in return. “I don’t really think of myself as a connector—that’s a term given to me by others. But I think that’s also a testament to the fact that my deepest intention is to have genuine conversations, and people gravitate toward that authenticity.”

Research is a natural part of the connection process for Weisz. But he takes research to a new level to find the details that no one else is likely talking about, which makes each interaction more memorable. “I’ll read the excerpts and acknowledgments in your book. I’ll go to the second page of Google to dig deeper. And I’ll have about 30 pages of notes on you by the time I interview you. I really look for things that are personal to the person, which allows them to open up with other things.”

Weisz performs in-depth research not only to learn about a person but also to learn what matters to the person. He focuses on getting to know the people behind the concepts and acknowledgments because those are the elements that matter most. “You get to tell a better story when you make real connections. You show you’re passionate, interested, and truly want to help, and that goes a long way in getting people to like you, trust you, and see value in your relationship.”

FOCUS ON HAVING FUN

Weisz takes his profession seriously, but he also believes that having fun has a place in the professional world, too. “Yes, I did don a full white Elvis jumpsuit and wig for a high-level event in Vegas. I’m not an ‘extra’ person by any means, but I do think it’s important to have fun. It gets people to open up and be themselves because they see you’re doing it, too.”

Walking into a room full of successful business people wearing a complete Elvis get-up might be intimidating for some people to pull off, but there’s more than one way to express yourself. Weisz wants to show people that life is about having fun, regardless of whether he’s there for business purposes. He wants to show people that they don’t have to conform to professional norms. “We did the Elvis thing not to get a rise out of people, but just to create a sense of community.”

Weisz even brings along gear for everyone else to dress up in so they can all participate together. “What happens next is that people let their guard down. They’re having fun. There’s no pressure. And they’re sharing a personal side of themselves.”

One of Weisz’s biggest secrets to getting people to open up is to first focus on your own energy. He believes that practicing gratitude has a major effect on how well you connect with others, which is why he uses Tony Grebmeier’s BeFulfilled journal. “Gratitude is a great reminder. It’s hard not to compare yourself to other people when they have larger businesses, a larger social following, and whatnot, but I’ve replaced comparison with compassion. Because when you’re grateful, life just has a way of working through you and turning any problems or insecurities or weaknesses into opportunities.”

Weisz has noticed that when he practices gratitude and makes it a focus in everyday life, he’s better able to connect with people on a personal level. They sense his sincerity and feel comfortable connecting with him because he’s grateful for the opportunity to do so.

Weisz believes that connecting is self-perpetuating―the more people you connect with and the deeper you connect with each one, the more you find in common, and the easier and more natural it becomes. “I go into every interaction thinking about how I continue to add value, even after the initial meeting.”

Weisz admits that connecting can take courage and creativity, but in the end, good connections are all about sharing stories. Those stories don’t have to be perfect. Just be able to have a conversation, and connections will come.