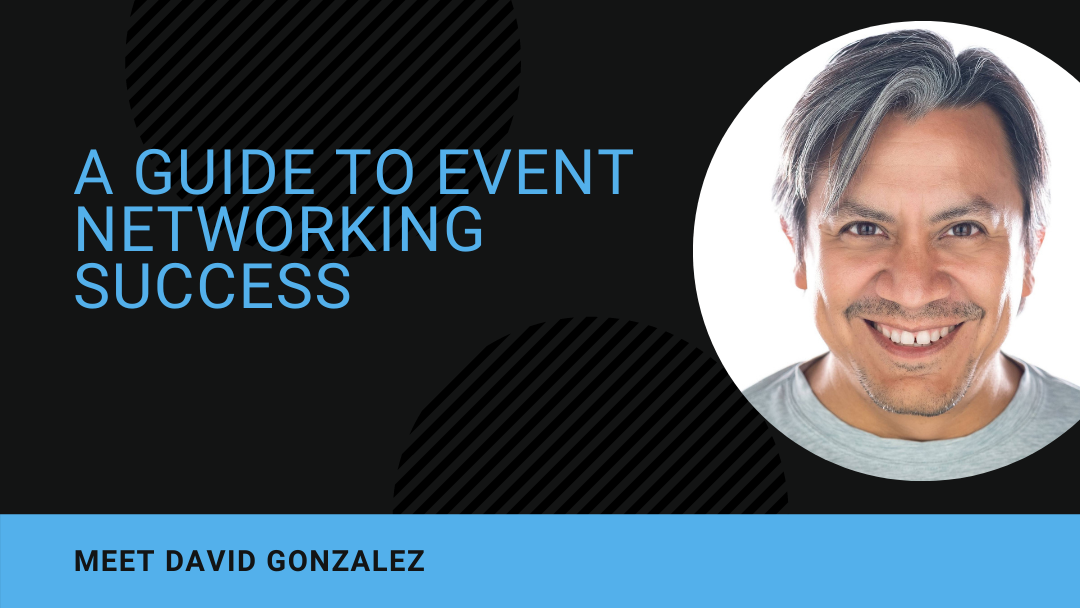 DO THESE 10 THINGS AT EVERY EVENT TO WALK AWAY A WINNER.

Here’s a little secret: networking at events is a lot easier when you know that the people at the event already have commonalities that you can build a conversation around.

It’s not like networking at, say, a wedding, where you don’t know whether the attendees are high school teachers or business VPs or bartenders or what-have-you. There’s a lot of wasted time in trying to figure out who you’re talking to and where they fit into your own ecosystem.

Affiliate marketing expert and founder and host of the legendary IMP party David Gonzalez loves that events are different. You’re automatically surrounding yourself with people who share something in common with you, so use that as a talking point and start connecting!

Here are David’s top tips for making every event a networking success:

USE A BENEVOLENCE STRATEGY

When there’s a finite amount of time to engage people at an event, it’s important to prioritize who you want to talk to and what to talk about. This can often encourage us to go straight after the low-hanging fruit, but approaching each interaction with benevolence will win more people over. Take time to connect on friendly terms without asking for something first. When you’re no longer hustling, you’ll be amazed at how much calmer and more natural you feel.

TAP INTO THEIR GOALS

Though you may share common objectives with other event attendees, David finds out specifically why other people are there. Ask what they need and what they’re hoping to take away from the event, then see how you might be able to help.

Then, once you know those goals, start listening. “Attention is the most valuable commodity today, and others will be more receptive to you when they think they’re also being well received.”

BE FORWARD-THINKING IN YOUR QUESTIONS

David believes that one of the best ways to build confidence in your conversations is to prepare for them ahead of time. Think of a few questions you’d truly want to know the answer to, then get the other person talking. Their response can lead to follow up questions, and even though you’ve essentially said a dozen words, they’ll walk away thinking you’re the coolest person in the room.

DON’T TALK MORE THAN YOU LISTEN

Listening is your most valuable skill when networking. You’re not concerned with pitching ways to help them, but rather listening for their biggest pain points, dreams, and desires to see how you can be the hero. In David’s experience,  that’s where your money will come from, and you’ll do it in an authentic way that sets you apart from the vultures in the room.

Mindlessly collecting business cards isn’t as effective as building rapport with those you intend to contact. When there’s clearly something you can do for someone else, grab their contact information and follow up.

DON’T EXPECT TO WIN WITH EVERY CONNECTION

Just like sales, David believes that good event networking is a numbers game. “At first, you might be impressed that you really connected with, say, 75 people at an event. But you should realize that out of those 75 people, there’s a good chance that only about five might bloom into big business.”

David recommends following up with your most promising contacts first. And for the other 70 (or however many you end up with), you can make a quick point of contact. “Tell them it was great seeing them at the event. Ask them when their next one is, or to let you know if you might be of any help in the future. It doesn’t take much, but you also don’t want to take away valuable time you could be investing in better relationships.”

NEVER ASK FOR AN IMMEDIATE FAVOR

David reminds us that one thing to never do when making new connections is to ask for something straight out of the gate. Starting a relationship with your hand out is no way to build loyalty, as it often looks like you’re only interested in the value the other person brings without offering any value yourself.

“I’ve had people say things like, ‘Hey, I hear you’re going to a party. Can you get me on the guest list?’ or, ‘I see you have three million subscribers, can you promote me for my launch?’ There’s something in it for the person asking, but what about the person fulfilling the request? A better approach here is to make the ask about them, not you, to elevate their status. Invite them to your event, ask if you can mention them on your podcast, or ask any type of question where you already know the answer.”

TURN AN INTRODUCTION INTO A RELATIONSHIP

The key to moving any relationship forward is by showing genuine interest. David emphasizes that this takes more than being interested in what someone else can do for you.

“I don't care if you're Warren Buffett, or Mahatma Gandhi, or whoever, the one thing we all have in common is that we're interested in what we're interested in. So when we find someone that genuinely shares or captures our interests, they're going to think you're the most interesting person they met at the whole conference without any extra effort from you. Just tune in to whatever they’re interested in and add value to that.”

AVOID ASKING WHAT YOU CAN DO FOR OTHERS

The age-old, “What can I do for you?” has run its course, and David recommends dropping the phrase from your vocabulary. “It’s overused and people know it. It’s now seen as a nicety that carries no weight or commitment. There’s nothing memorable about it, nothing that encourages the other person to want to take advantage of such a vague offer, and most likely they’ll put up a shield.”

If you really want to wow them, listen to what the person is interested in and what their goals are. When you can, offer something that will help them get a “win,” such as an introduction, or even a book you read.

Speaking of follow up, all the effort you put into networking is nil until you move the conversation forward. Take a selfie together and send it to them after the event. Or email a copy of your ebook or blog post that addresses something you spoke about. Add them on LinkedIn and discover what else you might have in common (including mutual connections!).